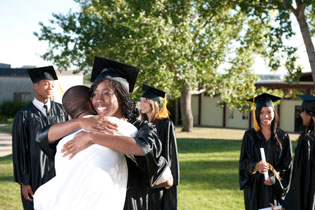 I’d like to introduce to you the Caring about People with Enthusiasm (CAPE) Legacy Fund, a non-profit foundation dedicated to raising funds to help students of modest means. I hope you will catch the vision, and support my ultimate goal: preparing those students for career achievement that will enable them to later help others walk a similar path.

The founding and organization of the CAPE Legacy Fund is not by happenstance, but by a gradual evolution. Years of preparation – of thinking, becoming, meditating and acting – have brought me to my readiness to launch this foundation. Beginning in my early childhood, my parents taught my nine brothers and me that education is most important, because it can never be taken from you. That belief took root in me. I have always worked hard to educate myself  and others throughout my life, and have succeeded to a great degree.

Along the way, I have learned that three phases are critical to success in the professional world: preparation, earning, and making a difference.

Preparation: There are many educational approaches to prepare one for a profession, from technical schools and trade schools to colleges and universities. Studies show that the more formal education one receives after finishing high school, the higher one’s earnings will be. Consequently, many students should pursue a bachelor’s, a master’s and a doctoral degree to maximize their earning power. Thus the preparation phase lasts longer for some than for others. If a student has specific goals, timelines, unyielding motivation, and sufficient financial resources, this phase may be considerably shorter than for one who must prepare in “fits and starts.”

Earning: Usually encompassing the total years that one works, the earning phase is the longest phase for most people. Some choose to work for a large company or a smaller business, or to own a business alone or in partnership with one or several others. Some choose government service at home or abroad, as a civilian or in the military. Some choose to run non-profit organizations – to teach in schools, colleges or universities – to fly to the moon or beyond – to care for the elderly in their homes. The beauty of the earning phase is that it has no limits. One can begin in one type of work, then acquire new knowledge or skills and change to another type. The constant creation of new jobs and positions continually offers new challenges to workers.

Making a difference: After acquiring an education and earning a comfortable living, one begins to think of one’s legacy, and to pursue new goals that will improve the lives of others. Though the threads of serving others, “giving back” and volunteerism run through all three phases, they shine most prominently in this third phase. One finally has the time to volunteer, to serve others and give back.

On July 11, 2009, I celebrated my 70th birthday, and followed up on a request made of me by a protégé about 15 years ago. LTC Larry Burnett is the Professor of Military Science at North Carolina A&T University, our shared alma mater. He told me one day, “Ma’am, when you start to do something about your legacy, I highly recommend that you raise money to help disadvantaged students who just need a little financial help to make it to graduation. Sometimes, even after they’ve worked all summer, they’re short a few hundred dollars to meet the semester’s bills. For only $800, they could complete the semester, but since there are no scholarships or loans available to them, they’re forced to drop out.”

I thought about this situation over the next 15 years, and decided that I would endow two scholarships to help such students. Then, as I began to talk to others about the scholarships, I discovered that there were many more students in similar situations. I learned that some disadvantaged students who receive full scholarships still do not have all their bills paid. Some “full” scholarships pay tuition, room and board – a substantial award. Yet some students may not be able to take advantage of the scholarship, because they lack funds for equally necessary expenses, such as books, lab fees, computer equipment and travel expenses. So, in addition to the two scholarships I endowed, I decided to start a foundation to help students cover these gaps.

Some of you may have known students who had the intelligence and drive to succeed, but lacked the financial means to continue their education without interruption. Some of you may even have been in that situation yourselves at one time. I hope all of you will agree that helping such students is a goal that deserves your generous support.